What is leak testing?

Industries That Use Leak Testing

Leak testing is an essential part of manufacturing in a variety of industries, including:

These are just a few industries that rely on leak testing technology from Cincinnati Test Systems (CTS) to verify part and product integrity. CTS is an industry-leading designer and manufacturer of both standard and custom leak test and detection equipment, providing accurate and reliable equipment, instrumentation, and airflow devices to customers around the world.

The Various Types of Leak Testing

Every part or product has unique performance specifications, meaning they all require different types of leak testing. The following is a list of the various types of leak tests and some of their applications:

Pressure decay testing is sensitive enough to identify non-liquid leaks using either pressure or a vacuum and can be calibrated to measure volumetric flow. It is one of the simplest and most effective forms of leak testing and is used for automotive components, castings, medical devices, and in pharmaceutical manufacturing as part of production and assembly.

Mass flow leak testing measures the volumetric flow passing through a part or product per unit of time. To test flow, the part is placed under constant, stable pressure and the flow rate is measured against a predetermined leak rate.

Functional testing measures the performance of complex assemblies. This type of test is conducted by applying force and power to the part to measure output against tolerance and ensure the part is within specifications.

There are various types of functional test systems, including:

Even the smallest leaks can have a big impact on part performance, occasionally causing parts to fail or crack. Vacuum leak testing is the most common method of testing sealed parts, as it finds leaks in housings or casings that could be caused by an external source. As a pressure decay test applies pressure, a vacuum is used and a pressure increase is measured based on a leak rate.

Tracer gas leak testing is a simple but effective way to find micro leaks outside the range of conventional airflow testing. This type of test provides high sensitivity, accuracy, and repeatability.

There are six types of tracer gas tests:

The tracer gas accumulation test uses the same instrumentation as the atmospheric sniffing test, but uses a chamber to isolate the part under test and contain the tracer gas. Once the tracer gas has accumulated, a mass spectrometer is used to measure the gas leaking from the test part.

The accumulation tracer gas system provides greater accuracy than sniff testing and can detect leaks as small as 1x10-4 scc/s. The test does not require the use of a vacuum chamber and can be loaded manually or automatically. Tracer gas accumulation tests are most effective when the atmospheric background is controlled because atmospheric tracer gas will affect the leak measurement.

Helium tracer gas is used in several leak tests because it has a small atomic size, so it will pass through extremely small leaks. A hard vacuum test uses vacuum chambers and tracer gas to detect micro leaks. After a stable vacuum is created in the test chamber, a mass spectrometer is used to sample the chamber for helium, continuously analyzing the molecule flow. If the flow exceeds the set reject point, the part fails the leak test.

The hard vacuum helium leak test is the most accurate and efficient of all tracer gas leak tests and is used to test parts with extremely low leak rates, such as sensors, housings, medical devices, sealed components, and refrigeration components.

The Leak Testing Solutions You Need

These are just a few of the most common types of leak tests. If you want to learn more about leak testing and potential solutions for your plant or facility, download the Ultimate Guide to Leak Testing for more detailed information. You also can contact the experts at Cincinnati Test Systems to learn more about CTS products and solutions and how they can help you detect leaks.

Leak testing is a complex process with variables that can make it difficult to know where and how much your part is leaking. We have taken our decades of experience helping manufacturers find the right leak tests and put together a comprehensive guide on what you need to know, including:

Fill out the form to download your copy today » 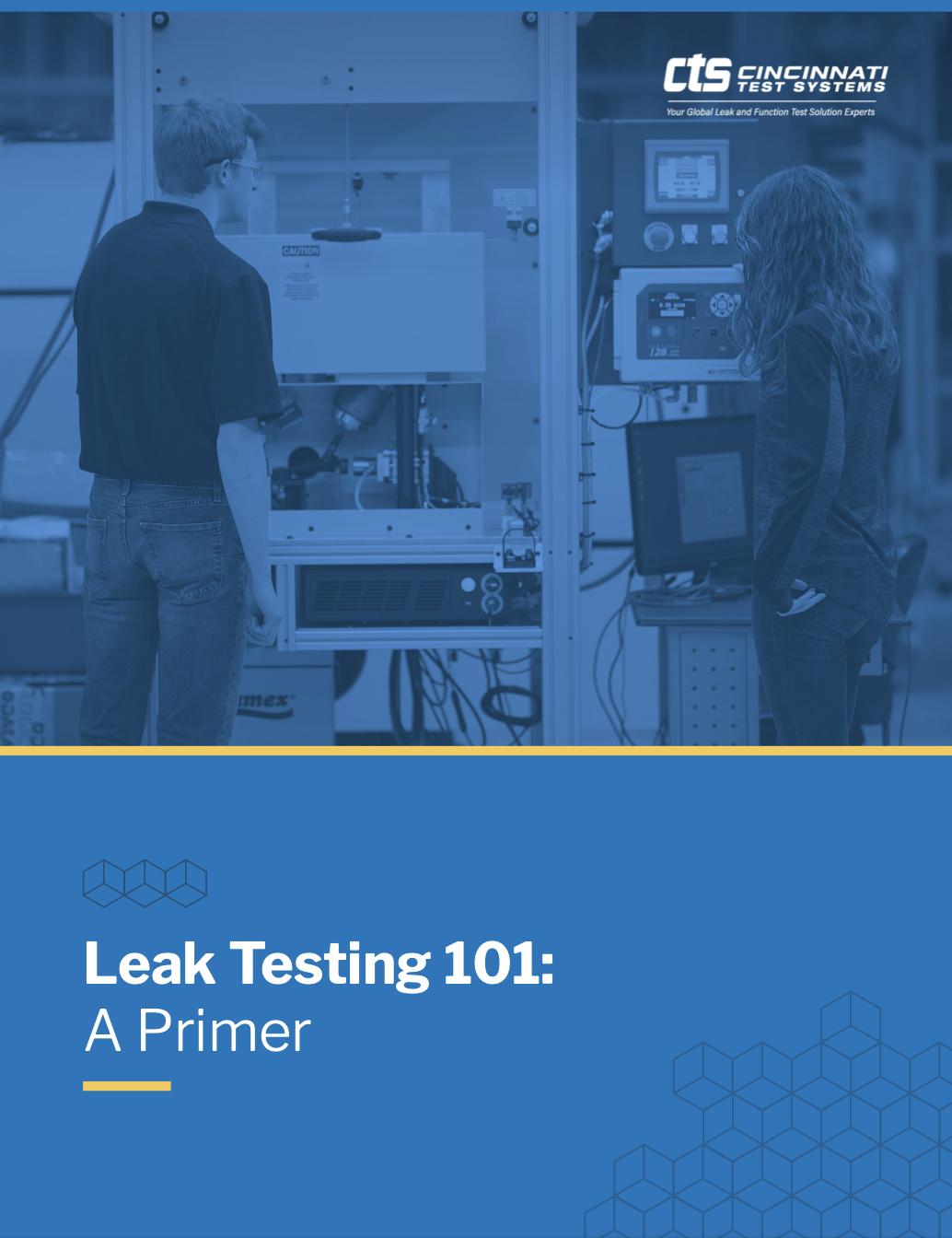